Still a Great Film After All These Years 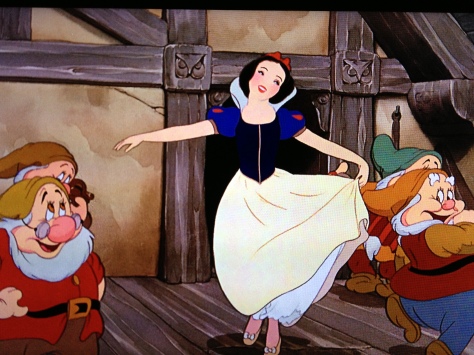 What if we could go back to a simpler time,
Of singing and dancing and speaking in rhyme?
When after the chores comes some family fun,
Then off to say prayers when the good day is done.
-Me

Originally released in 1937, Snow White and the Seven Dwarfs was a first in many respects, but most importantly it was the first full-length animated feature film released in Hollywood, not just by Walt Disney, but by anyone.  It was a truly groundbreaking movie.

Yet, those types of things don’t typically matter to a little kid, and when I was young, it was never one of my favorites.  I wasn’t really a fan of Snow White’s singing voice.  I thought it was weird-sounding.  Also, her hair-do was kinda odd. I thought the dwarfs were funny enough, but I really didn’t appreciate some of the humor in the movie. Overall, I enjoyed it enough, but there were other Disney movies I would rather watch if given the choice.

So imagine my surprise as I watched this film again as an adult and realized just what a good movie it is!  Sure, it is still a simple tale. Animation techniques have since been improved.  Snow White’s voice or hair hasn’t changed at all.  But despite all this, I found the film to be a very enjoyable experience.    Even after being around for over 75 years, the movie gave me laughs and smiles throughout, and I discovered many things to admire in the animation and artwork. This movie can truly be called timeless in my book.

There are a couple of things that stood out to me as I watched the film this time. The first is how effective the “scary” scenes were.  No, it didn’t make me jump out of my seat or anything, but I thought the forest scene was very creative and captures a young person’s fear of the dark unknown very well.  Then there is the Queen.  Wow, did they do a good job with her, especially once she became the old peddler!  She was downright creepy.

In contrast to the first item, the other thing I noticed is the simple prayer offered by Snow White the first night she was at the dwarfs house.  it was a childlike, sweet little prayer, but what caught me off guard was how natural it came in the film.  Today where stuff like that is kind of taboo in the public world, it was very interesting to see.  It made me feel good inside.

These are my thoughts for this viewing of Snow White.  If you have not watched it since you were a child, I would encourage you to give it a go.  You just might be surprised at how much you still may enjoy it.  I now leave you with a still of a deer kicking the heck out of Sleepy.  That part gets me every time. 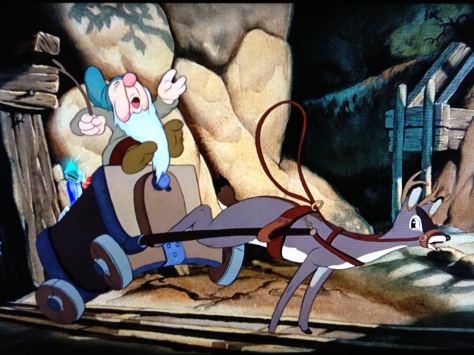