Give this Movie a Medal!

2012 was a really good year for animation. When the time of the Academy Awards came around, I was quite torn over which of the five nominees was my favorite. Each was wildly different, but still extremely entertaining (for the record, the films nominated that year were Brave, Wreck-It Ralph, ParaNorman, Frankenweenie, and Pirates! Band of Misfits. If you haven’t yet, go see them. All of them). At the time, I would have been satisfied if any of the films took home the Oscar. But looking back, I think my favorite has emerged, and it is Wreck-It Ralph. Those who took the time to see this movie at the theaters were in for a real treat (and as an added bonus, the short Paperman was the best short that either Pixar or Disney had done in years, and was part of the bill!).

One common saying at the time is that Disney and Pixar kind of swapped roles when they made the films of 2012. Disney’s Wreck-It Ralph felt more like the innovative, bursting-with-creative-energy Pixar films we had all grown to love, while Pixar’s Brave was a much more traditional Disney Princess fairy tale. I like that description, because it is mostly accurate when describing the films. Wreck-It Ralph is bursting with creativity and its themes and characters have as much depth and heart to them as Sully, Woody, or any other Beloved Pixar staple. Heck, the only thing really missing is a John Ratzenburger cameo voice appearance.

But even sans the Ratzenburger, Wreck-It Ralph has plenty of cameos and easter eggs for any nerd to enjoy. If you like arcades or old-school video games, you will love searching through Wreck-It Ralph to find all the little references littered throughout the film. And alternatively, even if you are just a Disney fan, then the filmmakers included old Disney properties as well for those with the keen eyes. I’ve always thought the easter eggs and hidden references were fun, and Wreck-It Ralph is a goldmine of hidden references. 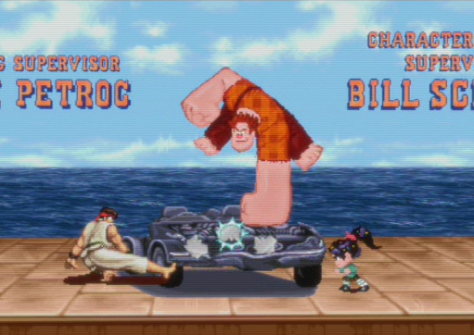 This is pure genius right here.

But films don’t survive alone on easter eggs. Luckily, the the trio of Ralph, Felix, and Vanellope von Schweetz form an extremely likable entourage. By the end of the film, you want Ralph to win his medal and get a little recognition, you want Felix to get the girl, and you want little Vanellope to be able to race and compete in her game. Wreck-It Ralph trods the familiar underdog story path, but it does so very effectively, and it serves as a great reminder about labelling people and dismissing them based on first impressions. Or, to borrow a phrase from Zangief, “Just because you are bad guy, doesn’t mean you are bad guy.”

If you’ve read my Disney posts for long, you’ll know by now that I enjoy movies that are entertaining, but I especially enjoy movies that both entertain and have something good to teach. I believe that Wreck-It Ralph fits into this second category of Disney film. It is definitely funny and entertaining, but it also manages to teach  some of life’s little lessons along the way. And what better lesson to teach than that of improvement and change? Even if you’ve spent your whole life as a bad guy, you still have some hero inside of you, and you can do good things. Even if you consider yourself a glitch (weirdo), you know what? You can still do great things. Also, Felix is a goody-goody, but that’s actually presented as a good thing! I like the messages presented in Wreck-It Ralph just as much as I enjoy its entertainment value.

Finally, I can’t mention this film without a quick nod to the animation and artistry. The characters, the environments, the colors, and everything else are just top notch in the worlds of Wreck-It Ralph.

Wreck-It Ralph may not have won the Oscar, but it definitely deserves a medal for its entertainment, creativity, and charm. It’s another great film this decade from Walt Disney Animation.

There are some fantastically animated worlds in Wreck-It Ralph.

A Delightful Return to the 100 Acre Wood 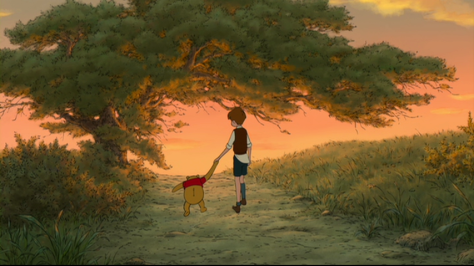 Winnie the Pooh is like coming home after a long vacation. It just has that comfortable, familiar feel to it. That is how I best describe Disney’s 2011 release and the 51st film in the Disney canon.

As I mentioned in my thoughts on The Many Adventures of Winnie the Pooh, back in the 60’s and 70’s, Pooh Bear still hadn’t caught hold in the hearts and minds of American children. Indeed, Walt Disney’s efforts can be thanked for that. But now that we are here in the 2010’s, it is very rare to find somebody who isn’t familiar with Pooh, Tigger, and the rest of the gang. They have been engrained into the very fabric of American society, no doubt helped along by countless spinoffs and television series, merchandise, books, and more that has been pushed by the Mouse Machine. 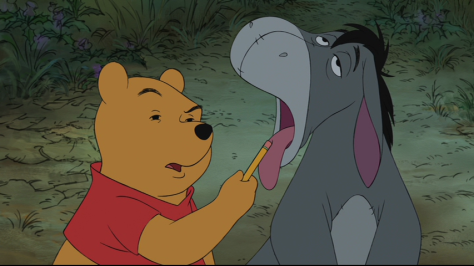 Just as Pooh’s prescription is more hunny, Disney has not been shy to push more and more Pooh on the masses throughout the years.

There has been so much Pooh over the years that it would be very easy to simply dismiss Winnie the Pooh as another pre-school cash-in attempt by Disney. However, when I heard that this was another one of John Lasseter’s “babies” and that he wanted to reach into the original books and recapture the spirit of the original film, I realized this film had some potential. And in my opinion, it delivers on that promise in spades. It may not have made much money in the end, but that should not diminish its worth as a Disney classic. 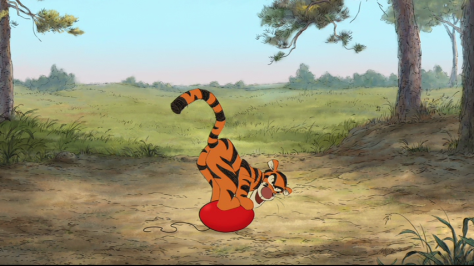 That Harry Potter, I’ll pounce the guy! No, Tigger, no you won’t…

[Small side rant time: you can blame the geniuses in the Disney marketing department for thinking Winnie the Pooh was somehow a “Summer Blockbuster” and releasing it on the same day as the grand finale of the Harry Potter film series – yeah, like that was going to end well! This movie screams “Christmastime release,” and how they managed to kill its profit potential from the get-go by releasing it next to Harry Potter – only to be followed by Captain America the very next week – is truly baffling. There is an interesting theory laid out by my friends over at Rediscovering the Magic with Rick and Friends – check it out. I kind of believe their theory on this one.]

So back to the feeling of coming home. To illustrate this point, I’ve decided to look back at my review of The Many Adventures of Winnie the Pooh and look at specific points I made as to why I love that movie, and see if they still apply to this new adventure in the 100 Acre Wood. 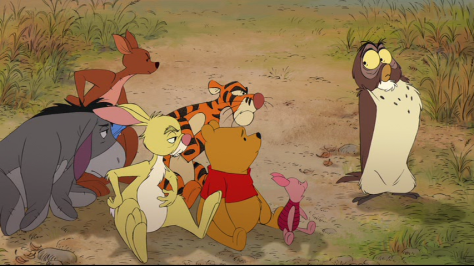 Point #1: The collection of characters.

In my thoughts on The Many Adventures of Winnie the Pooh, I said “There is such a variety of personalities on display here, and each character plays extremely well off of the others.”  This is still very much the case, and each character has its flaws on full display in Winnie the Pooh. In fact, I’d say that they are even more pronounced in the 2011 film than they were back in the original film, which is a great thing. Tigger is exhuberant as ever, Owl is still a know-it-all, and so forth. These characters are classics, and they continue on with their lovable traits here. Most importantly, though, their friendship still outweighs whatever flaws each character may have, and they manage to band together as a team and show a good example to children everywhere. 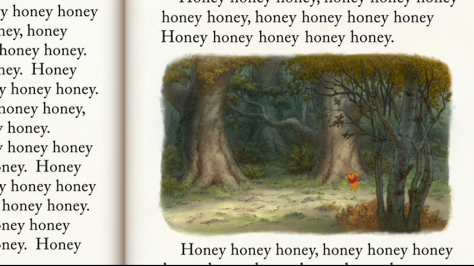 I loved the way the original film let you read along with the action and had characters interacting with words and letters on the page, hopping from one illustration to the next, and conversing with the narrator. This tradition is still very much the case in Winnie the Pooh. And it still causes me to smile and laugh. 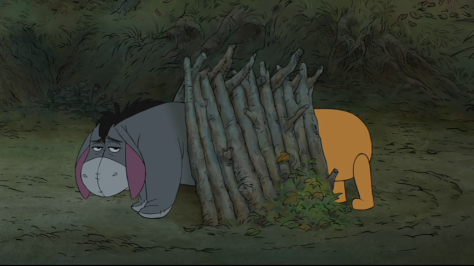 Point #3: The sense of humor and witty wordplay

The sense of humor, especially the wordplay, was probably my favorite thing about The Many Adventures of Winnie the Pooh. I imagine this would be the most difficult thing to replicate, because humor is a very tricky thing, especially since several decades have passed from one film to the next. Yet to my delight, Winnie the Pooh delivers the smiles and the laughs, and manages to include the witty wordplay of the original film. The exchange between Owl, Pooh, and Eeyore about “issue vs. Achoo,” Piglet and his “not/knot” and, of course, the problems with reading/spelling leading to the Backson are all great and quite funny.

To me, Winnie the Pooh isn’t so much a sequel as it is an extension of the adventures in the 100 Acre Wood, with all its charm. If you ignore the obvious changes in animation technology, the widescreen presentation, and other advancements, I think you really could include Winnie the Pooh as an additional story in The Many Adventures of Winnie the Pooh and not really miss a beat. Winnie the Pooh has the consistency with the original where it counts the most. Winnie the Pooh feels like home. 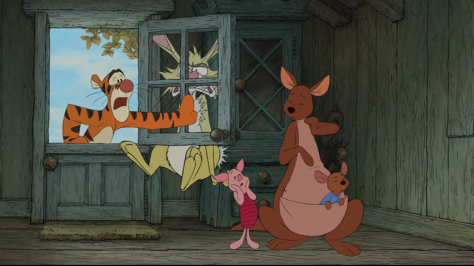 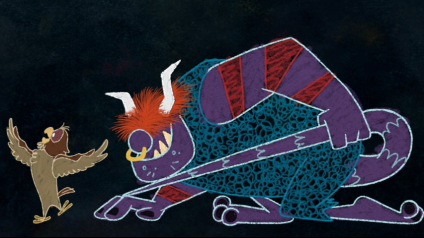 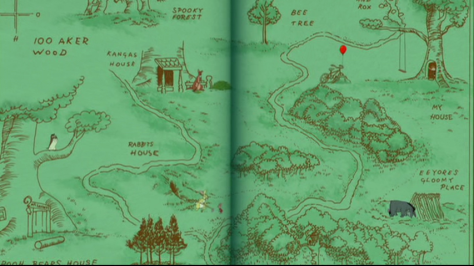