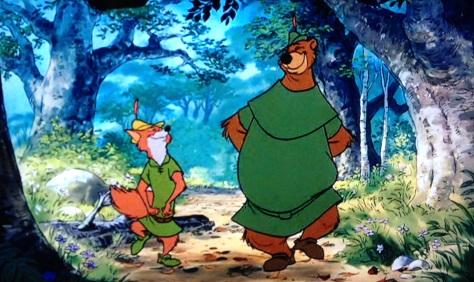 Apparently the word out there is that somewhere in the 40 years since its release, people decided Robin Hood wasn’t all that great. I’m not sure I believe these “people,” because I have yet to meet a real person who doesn’t like this movie. This has always been a favorite of mine, and a family favorite as well. We watched this one a lot growing up, and I know that most of my friends and family still enjoy it. Perhaps it may not be the masterpiece we have come to expect from Disney animation, but it pulls its own weight just fine.

I’m sure we all know the story of Robin Hood, so there really is no need to go over the plot. By doing what Disney was always really good at – animating animals with human qualities – the team at Disney made the story their own, uniquely recreating the legend by having Robin Hood and Maid Marian played by foxes, King Richard and Prince John as lions (naturally), and giving the part of Little John to Baloo the Bear‘s long lost brother. Part of the reasoning behind this choice is that originally some folks at Disney wanted to work with the story of Reynard the Fox, and eventually they decided they could kill two birds with one stone by making Robin Hood be a fox.

I think it was a great move. Allowing characters to be portrayed as any animal the creators could imagine opened up many possibilities, and they were able to create some fun characters with great personalities. Robin, Little John, Lady Cluck, and the rest of the gang are all entertaining and memorable. And the duo of Prince John and Sir Hiss make for a hilarious combination as the greedy villains with their beautiful, lovely taxes (Ah Haa!).

Clearly Robin Hood doesn’t take itself too seriously, and I believe that is where the fun lies in this film. Because the viewer sees that a bunch of goofy animals are playing these roles they understand and accept the ridiculousness from the very beginning. It makes the rest of the wild ideas, like the football references, the Hiss-Balloonmobile, and the wacky disguises add to the fun of the film, whereas in other situations these same ideas could have easily been a distraction. The same can be said for the variety of British and American accents featured in the film. We already know the film is not aiming for serious drama or realism, so the accents don’t really matter.

“Did he just call us ‘goofy animals?’ Nonsense!”

Now, are there negative aspects to the film? I’m sure there are, but nothing comes to mind after this latest viewing. Not even the recycled animation sequences bother me much in this film. To me, they feel like they belong in their respective scenes, as opposed to a lazily slapped-on rehash in different scenes of, say, The Sword in the Stone. I even believe that some of the recycling adds charm to the film, particularly Marian following in the (dance) steps of Snow White. I only learned of this occurrence fairly recently, but the more I see and compare the two, the more brilliant I think it is. Besides, it is still great animated dancing, even if it is recycled. It could be much worse.

Robin Hood was one of those films that I was eager to revisit for this project. Watching it is has always been a good time, and this viewing was no exception. There are fun characters, good music, quotable dialogue, and the film blends comedy, swashbuckling action, and romance to great effect. Oo-de-lally. 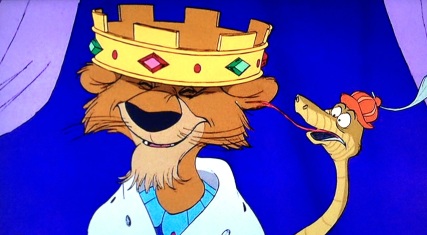