Sometimes the Bare Necessities are All You Need 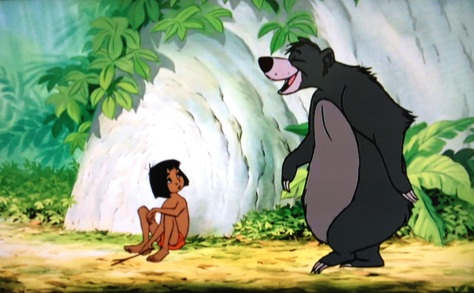 The Jungle Book is great entertainment. But after watching the movie and thinking about it, I realize that the plot is not the reason the film is fun. Honestly, there isn’t much to the plot. It deals with the animals trying to get man-cub Mowgli back to the man-village against his will. That’s about it. Fortunately, through the wild characters he meets along the way and the music that accompanies these encounters, Disney still manages to leave its mark on the old Kipling tale.

I haven’t read the book, so I don’t know much about the original story, but I did learn that the original Disney screenplay for the film was much darker in tone than the final film. In fact, it was dark enough that Walt Disney had an argument about it with writer Bill Peet, and that argument led to Peet’s resignation. After Peet left, Walt changed the story more to his liking by lightening the tone and eliminating much of the complexity of the screenplay. He also encouraged the staff to focus on characters, heart, and simplicity.

While Walt’s approach of story simplicity left the plot a little thin, The Jungle Book more than compensates for it with a showcase of animal animation. These characters, including Baloo and Bagheera, the snake Kaa, and the villainous Shere Khan, are animated masterfully (despite instances of obvious recycling – perhaps the animation was so good that they decided to reuse it? But I digress). All have their own unique touches and tricks that give them a superb blend of human characteristics and the respective animals they represent. Even Mowgli is animated well and has interesting little mannerisms you would expect from a young boy.

Beyond utilizing the animators to liven things up, another sure-fire way to lighten the mood was to create fun music. The early score and songs of the film mirrored the original screenplay’s darker mood, and when Walt dumped the screenplay he also decided to dismiss the music. He then passed the responsibility to Richard and Robert Sherman for the songs and George Bruns for the score. If the goal was to lighten things up, then surely there wasn’t a better fit than the Sherman brothers, who had recently completed their award-winning work for Mary Poppins. The strategy worked, and the Shermans delivered some great songs which contributed to the atmosphere that Walt Disney envisioned. However, one song from the earlier score was included in the final film, which was “The Bare Necessities.” And interestingly, that was the song that ended up being nominated for an Academy Award.

The combination of animation, characters, and music make The Jungle Book and enduring classic. The characters are so strong that many different people may have a different favorite character from the film. For example, my favorite was always Bagheera, but I can understand why people would like Baloo, or Louie, or any of the other characters. Likewise, the music is fun all the way through the film. These two items have always been basic components in the Disney animated films – and The Jungle Book proves that sometimes going back to the bare necessities is exactly what’s needed. 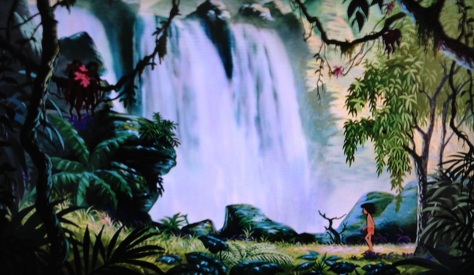 I couldn’t help but include this image from the scene selection screen on the DVD. The DVD crew probably could have done a better job with scene 5…or maybe I’m just seeing things?