With the start of a new decade also came the start of a new era for Walt Disney’s animation studio. After the release of Sleeping Beauty in 1959 and all its excess and extravagance, Disney realized that they needed to figure out a way to cut costs. Some suggested he just abandon animation altogether since by this time Disney was involved in television, live-action movies, and Disneyland. But he refused to do so. But something did need to change, because Sleeping Beauty ended up almost killing the studio (again).

The solution lied in a new technology. Instead of transferring each drawing from the animator’s paper to the cell using a team of painters who carefully traced and colored the characters, Disney adopted a Xerox copy process which allowed the team to directly transfer the animator’s drawings to a cell with a machine. This drastically reduced costs and as a result Walt essentially cut the ink-transfer department at the studio.

Although this new process cut costs, it was a tradeoff. On the one hand, the animators were excited because for the first time, what was up on the screen was what they truly had drawn. On the other hand, the hand-painted cells were rather beautiful in their own right, Also, the character outlines could now only be black. And it also meant that if the animator’s drawings were not cleaned up enough, the rough marks would be transferred to the screen as well. 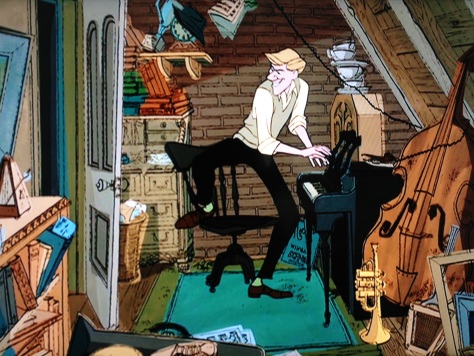 101 Dalmatians was the first feature film to use this new process. After watching Sleeping Beauty and 101 Dalmatians one right after the other, I noticed difference easily. 101 Dalmations at times does indeed look rougher when comparing the two movies. However, this isn’t necessarily a bad thing, because the film has an art style and a look all of its own. For the film, the artists actually decided that they would use the Xerox process not only for the animated characters, but also for the outlines of the backgrounds. This results in a certain blending and consistent feel throughout the film.

As for the film itself, it also represented a departure from the past. This was the first Disney animated feature film which had a truly modern-day setting (at the time, at least). 101 Dalmatians even pokes fun of some societal items of the time (Kanine Krunchies can’t be beat!). The music has a modern feel, and the film isn’t dependent on musical numbers. There are a few songs, including the great “Cruella De Vil” song, but they fall well into a real-life scenario as opposed to a typical song in a musical.

These differences are significant, but they do not diminish the quality of the film, nor do they eliminate that “Disney feel”. 101 Dalmatians is still a Disney movie through and through, loaded with memorable scenes and characters. I was impressed with the animal movement in Lady and the Tramp, but I am even more impressed with some of the animations of Pongo and Perdita, such as the scene where Pongo tugs Roger through the park.

In addition, 101 Dalmations has what some consider one of the best Disney villains ever (though I find this an especially difficult distinction to make, considering some of the great villains out there). Cruella De Vil is an outrageous and unique character, wonderfully animated and filled with personality.

All in all, Disney delved into this new era on the right foot with another great dog film. But after this film was released, I bet the animators were glad to be done with drawing dogs, and (over 6 million!) spots. 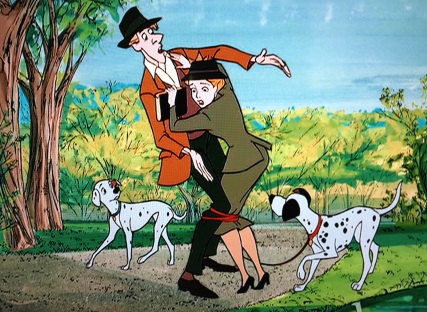 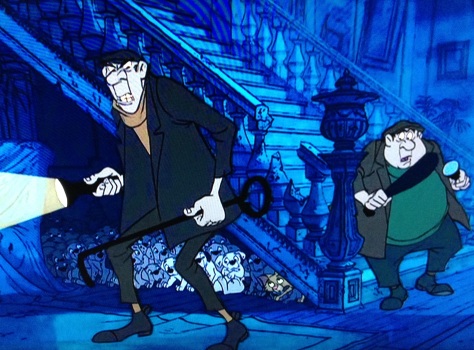